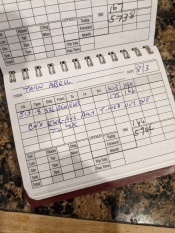 Every so often I find myself in front of a room wearing my corduroy blazer with leather elbow patches rather than my uniform jacket with four stripes. On some of those occasions my conversation with my audience revolves around their need and ability to be kind to themselves. Shortly thereafter something inevitably happens to challenge me, and I have to ask myself whether or not I really believe what I tell the audience. Am I willing to do that for myself? Today I invite you to join me in that self-reflection. Do you need to be more kind to yourself? Are you even able?

Back in the summer of 2017, when I was a brand-new captain, I had a bad night. I remember it well. I also remember my visit with my Chief Pilot asking him about what I might have done better. Some things just stick in your memory.

It was significant enough that I wrote the following essay. No idea why I never published it. I imagine I may have set it aside, fully intending to come back and finish it, got distracted by other writing projects, and just forgot about it. But now, after more than 3 years as a captain with over 900 flights (and way more than 100,000 passengers!) under my belt I can think of a few things I would likely do differently given the opportunity. I’m glad that I chose to “#stayintheprocess.”

And I feel compassion for the guy who wrote this.

These years later, in my opinion there’s still good stuff in it. I hope it might still inspire you, and that you’ll enjoy it. Here you go!

Two weeks ago I was the hero. This weekend I was the goat. Another dark and stormy night in Newark, and I failed my passengers. A series of unfortunate events that started with a line of thunder storms shutting down the airport for several hours ended badly for us. As the airport re-opened for arrivals, the company needed my gate, so I had to push off knowing I’d sit on the tarmac for at least an hour before I could take off. New as I was, with two hours still on my duty clock, I thought all would be well.

It wasn’t. As time passed without movement toward the runway, if I’d known then what I know now, I shoulda, coulda, woulda bugged my operations controller in Newark, my dispatcher in Chicago, the air traffic controllers with whom I was already in radio contact, for a different flight plan, different departure route, or higher departure priority as my duty day relentlessly decayed. Sadly, I didn’t know then what I know now.

But could I have really affected the outcome? What if I’d acted, become airborne, then had to divert? What if I’d asked all the right questions and all the answers had been no? Same outcome. But I’m second-guessing myself because I didn’t think in time to even try. And here I am beating myself up about unknown outcomes.

Do you do that?

Here’s the thing: Conor McGregor says, “We win or we learn.” A couple weeks ago I had the pleasure of “winning.” This weekend I had the opportunity to “learn.” I’m new to the plane, the pace, the environment, the weather, duty time constraints. It’s a very real learning curve. I feel guilty that my passengers had to pay for my learning. And the reality is that stuff happens with frequency in the domestic operation. And it has happened on my flights: this was not my first cancellation. But it was the first one where I felt like I could have done better.

On the other hand, am I beating myself up too hard? Another reality is that in the short time I’ve been a captain I’ve carried more than five thousand passengers to the places they’ve needed to go. So I’ve decided to give myself grace and space to learn from this. To get better at what I do. To pick up the ability to see sooner so I’m not bitten by these same issues again. So I can get my passengers where they want to go despite the weather, the company, the FAA.

It’s been a challenge to learn the new airplane, the new environment, the new pace. There have been moments where I’ve asked myself, “what was I thinking leaving my very comfortable B-777? After 15 years I could make that baby sing!” Do I want to go back? Or do I want to stay in the process and get good at this new thing?

This, I have decided, is where I need to be for this season. So it’s the latter course for me. I will stay in the process and work to become the captain that my passengers need me to be. And give myself permission to learn. Sooner, rather than later, I expect to be just as good as I was on the 777.

Have you been “the goat” recently? Are you beating yourself up too hard? Can you maybe give yourself grace to learn from what went wrong rather than falling into the trap of second-guessing? The inspirational speaker in me says of course you can. I hope my story helps you know that.

Mark graduated from the USAF Academy in 1982. After nine years as a pilot on active duty, he left the military to join a commercial airline. In addition to flying B-737s around the country, Hardcastle spends time in the Rocky Mountains and serves on the artistic staff of the Colorado Children’s Chorale. He lives in Centennial, Colorado, with his wife and four children. Need some help figuring out why you’re on this planet? Want to talk about discovering your mission and purpose? Contact Mark today to schedule a free personal consultation. He can also deliver an inspirational keynote or workshop for your organization! email: mark@symphonyofyourlife.com. 720.840.8361