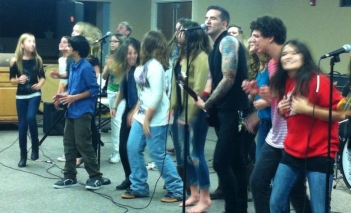 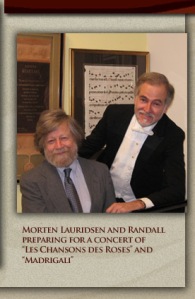 Here’s Part 1 in case you missed it…

Ya gotta love the internet! We found a date when Randall would be in his home office and we’d be in rehearsal. It was all set.

On the appointed evening, we gathered in Travis’s basement and ate pizza while he set up the Skype connection. Before we knew it, Randall came on the screen, sitting at his desk in Stillwater, devoting his full attention to these 25 eager young people in Arvada, Colorado. Now what?

I had a list of questions prepared in case the conversation dragged, but it wasn’t needed. Right out of the chute one of the kids asked, “Why do you write music the way you do?” Not bad.

Randall didn’t miss a beat. He explained that it’s always about enhancing the text. The text always dictates how the music is written. Every aspect of the music – notes, rhythm, meter, harmonies – should be about bringing out the message that the poet is trying to convey. The music should always bring the words to life.

Next question: “What inspired you to compose The Pasture?”

“I wanted the music to convey the reality that Frost wasn’t talking literally about cleaning out a pasture spring. He was talking about building a relationship. So I built the notes around that idea.”

And so it went. Randall graciously gave us a huge chunk of his time. The kids asked several more questions. Then we sang “The Pasture” for him through the magic of the internet, us in Arvada, him over in Stillwater. Then it was over and he was gone. And the kids will never forget the night that they “met” a famous composer and actually got to speak with, and then sing for, him.

That was in late September. Our concert was scheduled for early November. So we had several weeks to introduce concepts of traditional choral music that were new to members of the 303 Choir. We would have been remiss had we not frequently referred back to their time with Randall, whose music they were now learning in earnest. As part of that process, sometime in mid-October I asked the singers what they thought Randall might have been thinking when he set the notes around the text in The Paint Box. I enjoyed their ideas and the insights they came up with to explain why they thought that Randall had placed the notes the way he did around those words. But I left my own thoughts out of it for the time being.

In Part 3 I’ll share what I learned from this experience, and what I hope the kids took away…

Link to Mark’s book, The Symphony of Your Life

Mark graduated from the USAF Academy in 1982. After nine years as a pilot on active duty, he left the military to join a commercial airline. In addition to flying B-777s around the world, Hardcastle spends time in the Rocky Mountains and serves on the artistic staff of the Colorado Children’s Chorale. He lives in Centennial, Colorado, with his wife and four children. Contact Mark today to schedule a keynote or workshop for your organization!