In case you missed it, here’s Part 1…
…It was a good moment. But it was about to get better. Remarkably better. Dramatically better. Unbelievably, serendipitously better.
I spent my few minutes in the drum circle, then continued on my way over to Queensway Road to my favorite shawarma hole-in-the-wall to grab some dinner. An hour later I was back in my room, logging my phone into the hotel wifi. That’s how I’ve been keeping up with my son, Seth, who is on a pilgrimage along the Camino de Santiago in northern Spain. 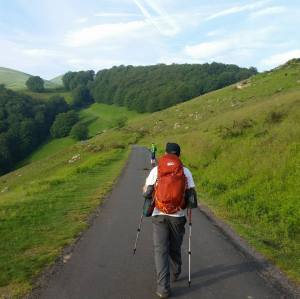 I’m grateful every day for the technology that lets me keep up with him as he moves. He’s only halfway done, but already has accumulated stories and insights that will direct the rest of his life. Sure enough there was a message from him waiting for me on WhatsApp. The time stamp was precisely the moment I had been dancing in Hyde Park. This is what he said:
“I was just in a drum circle.” 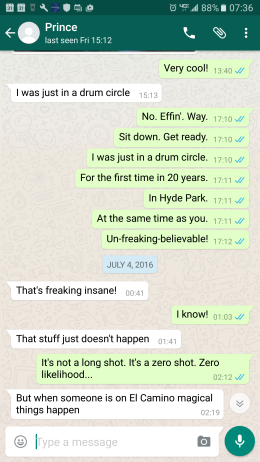 And just that quickly I learned a new word: Synchronicity.

1. an apparently meaningful coincidence in time of two or more similar or identical events that are causally unrelated (from The British Dictionary)

How are we to recognize acausal combinations of events, since it is obviously impossible to examine all chance happenings for their causality? The answer to this is that acausal events may be expected most readily where, on closer reflection, a causal connection appears to be inconceivable. – Carl Jung, Synchronicity: An Acausal Connecting Principle

Before that night “Synchronicity” had been little more to me than the title of a song by The Police. Since then I’ve found myself reflecting on stuff that I know to be true that simply cannot be explained by science or logic. Moments I’ve lived personally – seen with my own eyes that have given me pause. Seems as though I’m not the first one to reflect in that way. See the Carl Jung pull above, and the Wikipedia link at the very top of Part 1.

Mark graduated from the USAF Academy in 1982. After nine years as a pilot on active duty, he left the military to join a commercial airline. In addition to flying B-777s around the world, Hardcastle spends time in the Rocky Mountains and serves on the artistic staff of the Colorado Children’s Chorale. He lives in Centennial, Colorado, with his wife and four children. Contact Mark today to schedule a keynote or workshop for your organization! email: mark@symphonyofyourlife.com. 720.840.8361

One thought on “Synchronicity, Serendipity, and the Importance of Things Unseen, Part 2”